Condoms are made of very thin latex and are designed to cover the penis in order to stop the sperm in semen coming into contact with the vagina.
Condoms also stop sexual fluids being transferred between partners which provides protection against STIs.

A condom covers the penis or sex toy and acts as a barrier between it and the mouth, vagina, penis or anus.
Condoms protect against pregnancy by stopping the sperm contained in semen coming into contact with a vagina. They are the only method of contraception that protects against both pregnancy and sexually transmitted infections (STIs).
Some people like to use condoms with another method of contraception (e.g. the pill, implant, injection), so they don’t have to worry about pregnancy and STIs

There are 2 types of condoms.

The male type is made of very fine rubber. When used correctly they are 98% effective at protecting against pregnancy. It is the more commonly used and is rolled over the hard penis. However, they have to be used with care in case they burst and must be placed BEFORE the penis comes in contact with the vagina. 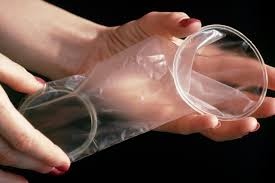 Female condoms are made of a soft polyurethane sheath which lines the vagina and the area just outside before sex. They are held in place by a ring at either end and 95% effective in protecting against pregnancy. Female condoms are stronger than the male type but they can slip and you have to make sure the penis goes inside the condom. They are also more expensive than male condoms and less available to buy. Make sure to read the instructions on the packet carefully.

What makes a condom less effective?

Where Can I Get Them?

Condoms are available in < the Ilash clinic,>chemists, vending machines in nightclubs and pubs, some supermarkets, GUM clinics, health centres and often in student unions.

Try to buy a brand with a CE mark or BSI kitemark. Remember to check the expiry date.

How To Use A Male Condom

Look after your condoms

Keeping condoms in your pocket or at the bottom of your bag for a long time might damage the condom. If the wrappers look damaged, then probably the condoms are too old. Check the sell-by date. Out of date condoms are less effective.

Make sure it’s got a BSI kitemark or CE mark on the wrapper. That means they’ve been machine-tested to a really high standard.

Do I  need to use a condom as well as other methods of contraception?

Some women like to use condoms with another method of contraception (e.g. the pill, implant, injection or patch). This gives double protection against pregnancy and also helps to protect against STIs.

This website uses cookies to improve your experience while you navigate through the website. Out of these, the cookies that are categorized as necessary are stored on your browser as they are essential for the working of basic functionalities of the website. We also use third-party cookies that help us analyze and understand how you use this website. These cookies will be stored in your browser only with your consent. You also have the option to opt-out of these cookies. But opting out of some of these cookies may affect your browsing experience.
Necessary Always Enabled
Necessary cookies are absolutely essential for the website to function properly. This category only includes cookies that ensures basic functionalities and security features of the website. These cookies do not store any personal information.
Non-necessary
Any cookies that may not be particularly necessary for the website to function and is used specifically to collect user personal data via analytics, ads, other embedded contents are termed as non-necessary cookies. It is mandatory to procure user consent prior to running these cookies on your website.
SAVE & ACCEPT
Follow
-